We woke up to quite a foggy morning. We packed up as we were moving on from Parc de Cygnes.

We headed back towards Belgium – the roads were still very foggy as we set off but the sun was burning steadily through it and another sunny day beckoned.

En-route we stopped at Warlen Court British Cemetery. Another beautiful, moving place with cherry blossom trees watching over the graves.

We had received a tweet from @northallertonmh recommending that we try and find the Yorkshire trenches as we are fellow Yorkshire folk. This was located in an industrial park area on the edge of Ypres and had been discovered by accident in 1992. “The Diggers” found 2 corridors 10 meters below ground with small and large rooms. It seemed as though you are able to go and have a look down in the trench but on our visit it was taped off.

Approach to the Yorkshire trench

Walk around of the Yorkshire trench

Pictures relating to the Yorkshire

We continued on to our site in Ypres at Camping Jeugdstadion. We arrived about 1pm and had to use the automated check in as reception was closed 12.45 until 4pm. The automated check in had simple instructions to follow which then dispensed a card to open the barriers and our plot number was printed on the receipt.There are 3 areas –field for tents, motorhomes and caravans on grass hardstanding camping pitches and an aire style area for motorhomes only.In hindsight this area would have been perfectly adequate but  we had booked a camping pitch.There is electric and water to each pitch. The toilet block isn’t really big enough for the size of camp. The camp is handily situated - a 10 min walk into town and there is an Aldi 10 mins in the other direction. After setting up we walked along alongside a moat into nearby Ypres.

Approach to the site

We entered Ypres through the stunning Menin Gate. This is a huge memorial spanning the road. The Last Post ceremony is held here at 8pm every night. 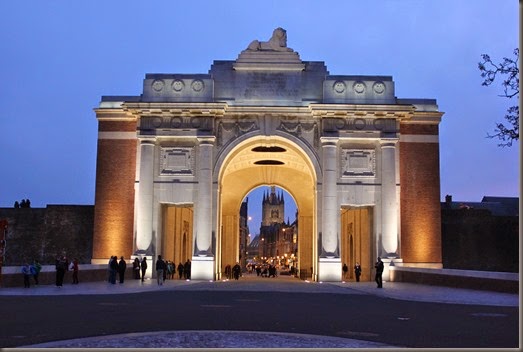 After paying our respects we continued into Ypres. This is a very pretty town with lovely architecture ( a lot of which had to be rebuilt after the war). There are plenty of places to eat and of course there are shops full of fabulous Belgian chocolate.

We went to the In Flanders Field Museum which is in the Cloth Hall, a lovely building which has been rebuilt after sustaining heavy damage in the war. In contrast to the Museum at Peron this was fantastic. There was so much to see! It was interactive by way of a wristband. It was very good value for money. 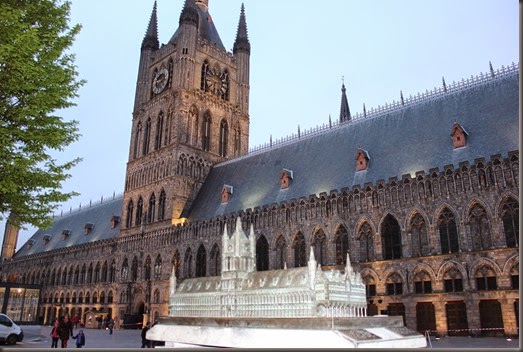 We climbed the belfry which was exhausting but worth it for the view at the top. 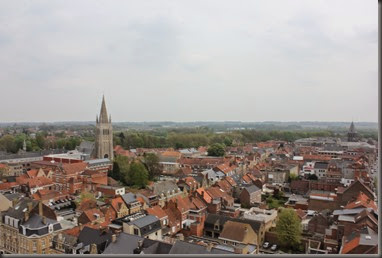 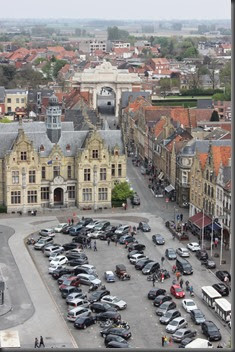 Part of the exhibit showed a scaled down model of the Yorkshire Trench and dugout that we had earlier visited. This was really good to see. There were also items found in this trench in the exhibition. 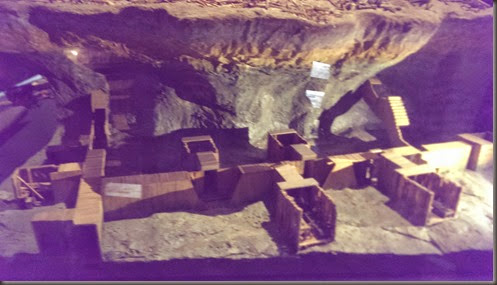 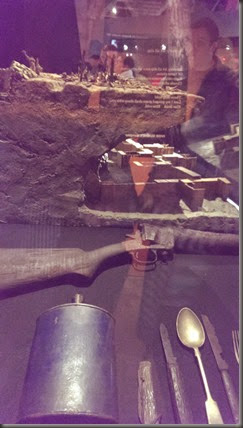 We enjoyed a meal in the town and headed back to smarten up before attending the Last Post. We nipped into Aldi on the way back but there was no milk!! Paul and Sophie went further on to a Spar (wish we’d just gone there first as it was really nice and well stocked) and returned with 2 bottles of milk feeling rather victorious. It turned out later when everyone spluttered on their strange tasting tea that this was not milk but bottles of drinking yoghurt!!

Back to the Menin Gate. We arrived about 7.15 and already the main public viewing area was thronged with people. There were at least 8 coaches parked near.  We took up a spot on the road next to the Menin Gate and waited. The crowd grew and grew. It is amazing and a testament to the memory of all those lost men that this ceremony continues to draw so many people every day. It was very busy and the crowd was packed together but we were only 2 or 3 people back so had a reasonable view.  At 8pm The Last Post sounded and selected people went to lay wreaths. A choir sang a couple of songs including an anthem (not sure which country) followed by God Save The Queen. After the ceremony dusk was just drawing in and the Menin Gate looked lovely all lit up.

We visited a chocolate shop to stock up on Belgian Chocolate and popped into Tommy’s Souvenir shop for postcards, stamps and souvenir car stickers (Paul likes to get Monty a sticker of places we have visited). The lady here was very friendly and chatty and told us about the Cat Festival held in Ypres tri-annually since the 1950’s. This involves a Cat themed parade culminating in (toy) cats being thrown by a jester, from the Cloth Hall Belfry into the crowd below. There are various legends how this cat throwing originated, some related to witchcraft and dating back to Medieval times. The local story is that Ypres had a mouse/rat problem so cats were brought in to keep vermin down but then bred so much that they then became a problem themselves and were thrown off to reduce their numbers.

We headed back to the campsite. Shortly after going to bed the local disco started and unfortunately the heavy base beat could be heard until about 2am.