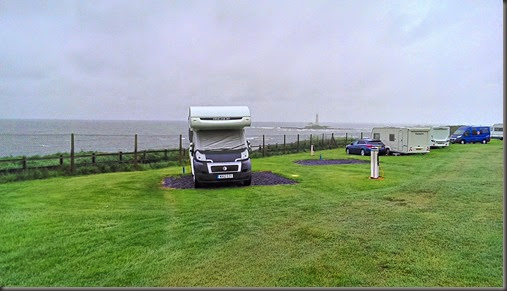 It was time for another visit to Old Hartley at Whitley Bay. Up the A19 and through the Tyne Tunnel (£1.60 each way).  We arrived a little earlier than planned ( before the 12 o’clock check in) so drove past the site towards Blyth. There we found a big free car park called the Mermaid car park along the seafront.

There was a cafe/ fish and chip restaurant and a coffee shop/ ice cream parlour. There was also a children’s play area and toilets with outside solar showers so in the height of summer with kids, this would be a nice beach to visit. Sadly when we arrived it was very windy, quite chilly and raining. We had a quick, bracing walk and then headed back into Monty’s warmth. After killing a bit of time, we headed to the Old Hartley Site just after noon.

This is a lovely site, set on a hill (ramps needed for a lot of the pitches) with a sea view and a view of St. Mary’s lighthouse. The wardens are friendly and the site and facilities are spotless. We chose a pitch right by the sea and quickly set up.  With tummies rumbling we headed for the pub near the site entrance. The  Delavel Arms serves great, home cooked food at great prices.  Portions are large and the desserts (if you still have room) are lovely. Thoroughly stuffed we headed back to Monty. The weather hadn’t improved so we settled in for a marathon viewing session of the current preferred box set – The Big Bang Theory.

Saturday dawned drier & brighter. We caught the bus (308) from the bus stop which is a 10min walk from the site and headed into Whitley Bay itself. The front here is undergoing rejuvenation. The big white domed structure (Spanish City) is also being refurbished.

As fans of ITV’s Vera we had fun spotting places where Vera had been filmed.

We had a walk along the long sandy beach then headed back to barbecue. 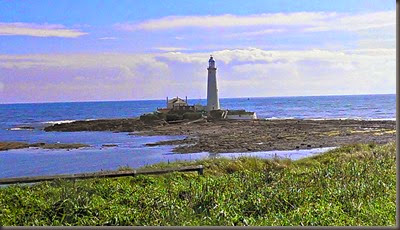 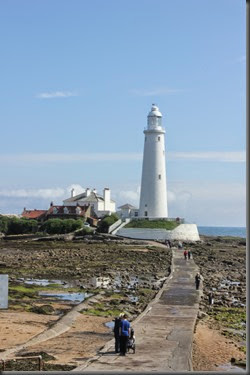 Another sunny day on Sunday so we walked to the lighthouse. Because of the tide this can only be accessed at certain times. Consequently the lighthouse isn’t always open so check for opening times if you would like to go in the lighthouse. We climbed the lighthouse steps last year and it’s worth a visit but wasn’t open this time. There is a large car park near the lighthouse if you are visiting by car/ motorhome. There is also an ice cream van and burger van in residence. We then continued along and down onto the beach for another walk. Later we popped to the nearby shop and noticed that they are about to face some stiff competition as a new Co-op was nearing completion. When staying at this site, besides the afore mentioned shops and Delavel Arms, there are also a couple more pubs and a fish and chip restaurant within a 20 min walking distance.

Monday dawned sunny again - almost unheard of for a bank holiday Monday! All too soon it was time to pack up again and head for home.

The Bank Holiday beckoned and we were booked into Bridlington Caravan Club. We had stayed here just after it had first opened a couple of years ago. It is a nice, modern well organised site with spotless facilities. The site is split into two areas, we chose a pitch in the first area and set up. The sun was shining and we were able to sit out although there was a cool wind.

Saturday dawned bright and sunny. There is a bus stop outside the site so we caught the bus into Bridlington early on Sat morning (£3.30 per adult return trip). The bus journey took us past Sewerby Park and a model village so there are places to visit nearby even if you don’t want to venture right into Bridlington.

Bridlington has a good selection of shops and there was also a small market. We headed  towards the seafront. There are plenty of places to eat and kiosks for takeaway fish and chips, doughnuts etc. You can take a ride on a speedboat or a pirate ship from the front (we have enjoyed these on our past visit). You can also take a boat trip to Bempton Cliffs from here as well. There are funfair rides along the front with lots to keep the kids entertained. There are plenty of amusement arcades if like me you like to have the occasional go on 2 penny falls. As we were early (10ish) it was very quiet and it was nice to have a mooch around without battling through crowds. 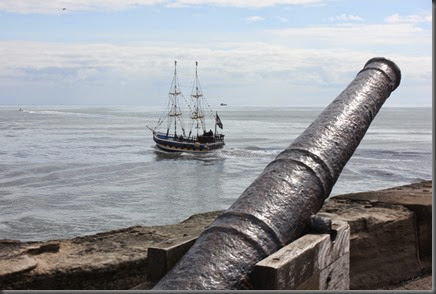 Part of the beach was cordoned off as work was being done but there was still miles of nice sandy beach so we had a good walk to work up an appetite for lunch. 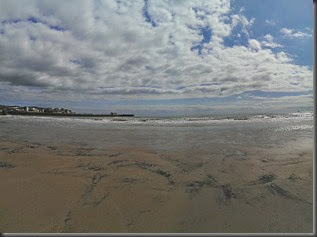 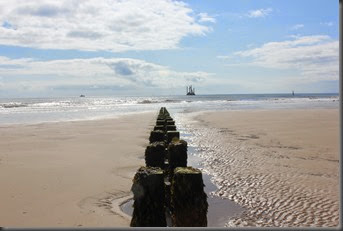 We decided to eat at Rags restaurant near the harbour and would thoroughly recommend it. Their homemade fishcakes were really tasty. We chose fish and chips for our main course. These were delicious – a good sized fish and fantastic chunky chips. The desserts looked really nice as well but we were too full to sample these.

We were also amused to see that a duck had taken up residence at the front of a moored rowing boat (you can just see his white head above the first buoy) with two seagulls for company at the rear. 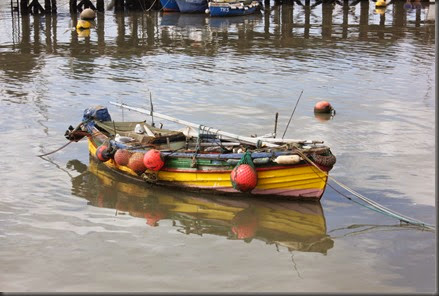 After lunch the sun was still shining (usually unheard of on a bank holiday) and Bridlington was now very busy. We caught the bus back to the site and enjoyed the sunshine.

We were woken up on Sunday morning by heavy thudding noises on the roof. I thought a seagull must have landed up there but as I looked up, a pigeon was staring down at us through the skylight! After our early morning wake up call we spent the day relaxing at the site. We tried out our new electric grill.

On Monday we packed up early and decided to head for breakfast at Flamborough Head.

There is a  good sized pay and display car park so parking Monty wasn’t a problem. There is a lighthouse  and a nice restaurant which does a great big breakfast. It was lovely to sit in the restaurant and gaze out of the window at the sea whilst tucking in. 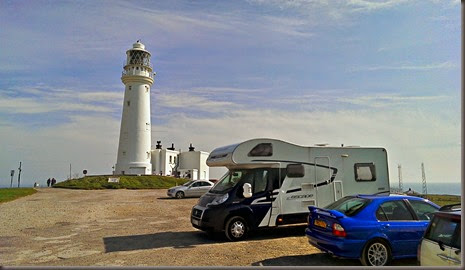 After breakfast we walked to the lighthouse and cliff edge where we saw a few puffins flying past.

Sadly, it was now time to return home but we had had a lovely long weekend and been blessed with fine weather.