Well after some discussion about our first trip abroad with Monty, we settled on Spain. A 1584 mile round trip from Yorkshire down to Plymouth. From there taking the overnight ferry to Santander on Brittany ferries, then to Haro for an overnight stop and onward to our final stop for 8 days at Playa Montroig camping site near Tarragona. I had wanted to do a few nights in various locations in Spain but I was out voted for a long stay at the fabulous looking 5* resort of camping Playa Montroig.

So with our Caravan club Red Pennant insurance set up, Brittany ferries booked direct on their website (same price as the Caravan club) we set off on a cold 3c Saturday morning on the 30th of April from North Yorkshire to our stop over at the Caravan Club site at Exeter racecourse.

It was a long seven hour  drive down but after driving past the turning and having to turn round we finally arrived at the site and a warm welcome despite the cold weather.

After a good nights sleep we were fresh for our short hour drive to the Brittany ferries terminal in Plymouth. Those that follow Monty on twitter will know that we were very impressed with @brittanyferries who had followed us back and even tweeted various bits including info on the roads approaching the port here and even when we were in Spain they kept us informed. Excellent. Even though we arrived at the port 3 hours before departure there were quite a few vehicles already there.  After collecting our tickets and passport checks we had the usual customs check. Are you carrying any sharp knives? How do you answer that when you are carrying a kitchen in your vehicle!!

We were quickly boarded on to the ferry – the Pont Aven, flagship and 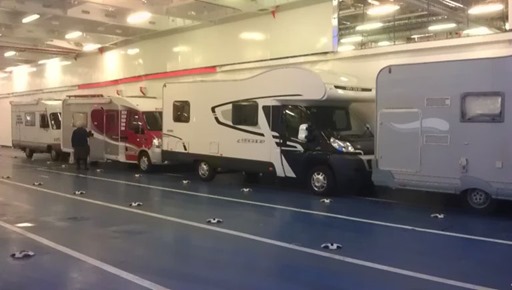 largest of Brittany ferries fleet, carrying 650 vehicles and 2400 passengers. Sailing time is approx 21 hours. We headed to our 4 berth cabin which we were greatly impressed by. very clean and spacious with a pull down bed on wall, a settee that flipped into a bed and 2 bunks which were stowed in the ceiling. It even had a view - we were expecting a small porthole to look out of and instead had a huge  window.

We ate our late lunch / early evening meal while the ferry was still loading. The food was lovely. Then we headed up top to watch Plymouth disappear and the English channel  open up in front of us.  My eldest daughter and I went to the small cinema on board to watch the new Tom Cruise film – Jack Reacher - while my wife and other daughter relaxed in the cabin.

The crossing was fairly smooth and after a goodnights sleep we headed off to the all you can eat buffet breakfast.  At 11am we saw the Spanish port of Santander coming in to view and the snow capped mountains behind.

The weather was a lot warmer than back home.  Luckily we were one of the first vehicles off. now I just had to remember to drive on the right and try to read the silly red kph figures instead of mph. Whoever at Fiat decided that very small numbers in red on a black background was a good idea wants shooting.  Instead I relied on the two satnavs I run – one on my htc phone – sygic and my old windows based igo 8 5inch satnav which displayed the kph – this now has been replaced with a Nexus 7 tablet.  Also as a backup I had written and stuck to the radio a list of converted mph to kph  speeds for various road types. Determining which limit a motorhome could do on motorways etc was interesting - some mentioned top speed 0f 90kph others the same as cars 120kph.

Yet again Brittany ferries tweeted wishing us a good journey and off we set.

As it was Easter Monday we had been warned that most of Spain is closed but  fuel stations were open and we also topped up on basic provisions. The drive from Santander to Bilbao along the coastal road was slow near Bilbao due to a small accident but once clear of Bilbao the motorway was quiet. We encountered some rain enroute to Haro, our overnight stop before reaching our destination.  Arriving at Camping Haro (friendly, English speaking) at the edge of town at 4pm we quickly set up and headed off in to town to look around before the next black clouds arrived. 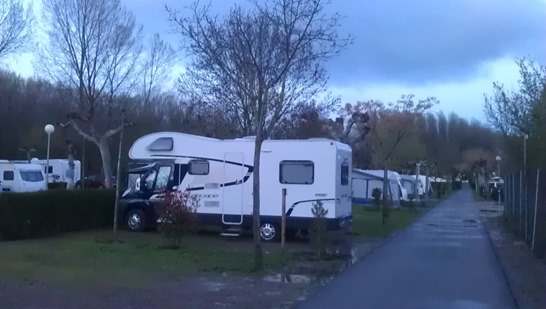 Haro is a town and municipality in the northwest of La Rioja province in northern Spain. It is known for its fine red wine and every year the Haro Wine Festival is held where locals hold a wine battle. It has an important architectural heritage, including the main entrance of the Santo Tomás Church, the work of Felipe Vigarny, numerous palaces, and the old town, which was declared a Historic-Artistic Site in 1975. Apart from its role as home to many of the great bodegas in La Rioja, one of Haro's other claims to fame is that it was the first town in Spain to have electric street lighting.

It was a nice town with a beautiful church but as it was Easter Monday only bars and coffee shops were open. As we wandered around we were amused to see huge bird nests on some chimneys – they were storks.

We headed back to Monty for tea and that evening the heavens opened and it rained heavily.

We left at 8am the following today for the last leg of the journey – a 6 hour drive – with a brief stop at a supermarket for supplies and also a lunch stop.

En route we drove across the greenwich meridan time zone marked by signs in advance and an arch over the motorway marking the line. 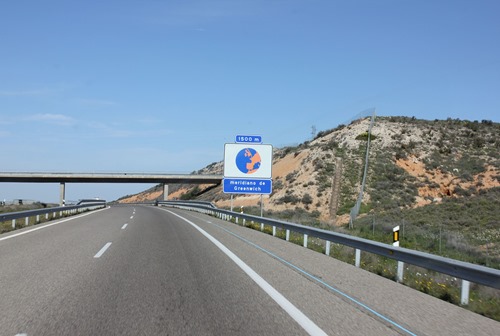 We arrived at Camp Playa Montroig to be welcomed by their friendly receptionists. We had booked a beach front pitch and were offered a few options to go and have a look at to choose from. Our part of the site was made up of palm tree lined avenues leading to the beach.

We chose our pitch - it was lovely, separated from the beach by a small hedge. We looked straight out to sea and looking up the coast to our left we could see Porta Aventura theme park and to our right was Miami-Plaja. The beach was postcard perfect with clean white sand against the blue sea and sky. We set up then set out to explore the site.

Wow!!! The site was fantastic- immaculate and well maintained. The facilities included a couple of restaurants,bar, a very well stocked supermarket, a gift shop, patisserie and even a hair dressers/ beauty parlour. A bodega, fish shop and takeaway were closed as we were out of season. Apparently in Summer the site attracts 5,200 but was very quiet whilst we were there as the Spanish school children had had their Easter Holiday before Easter and had all gone back to school the day we arrived. There was a choice of 2 pools – 1 heated with a couple of slides and one unheated.There was a small toilet block and wash up near our pitch and a bigger block with showers nearby. Both were spotlessly clean. The supermarket had a good butchers counter and we bought chicken skewers and burgers for the barbecue.

The weather was sunny and warm but a bit windy.At the end of our first day at Playa Montroig it was lovely to be lulled to sleep by the sound of waves crashing on the beach just a couple of metres away.

The next day dawned sunny again but still breezy. A visit to the pattisserie got the day off to a good start with freshly baked croissants, pastries and bread (this became a daily routine). We decided to head for the pool. 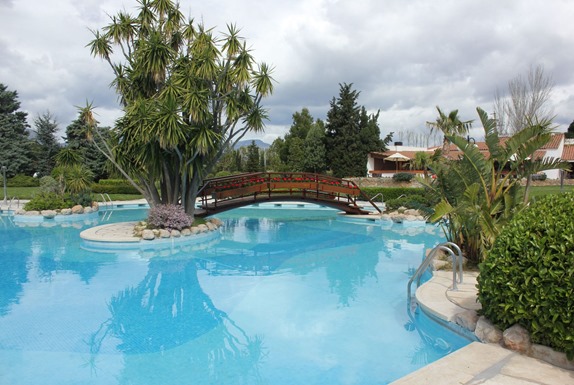 The heated one was undergoing a small bit of maintenance and was temporarily closed so being hardy Yorkshire folk we braved the unheated pool. Brrrr it was freezing but after a while you got used to it (or just became so numb). After a wonderfully warm power shower we relaxed on the beach. At any one time there were only about 10 people on the beach. It was so quiet and relaxing.

That night we decided to try the restaurant. It was stylish and modern with a good choice of menu – pasta, pizza, steaks,grills and fish. The staff were friendly, the portions were good and reasonably priced. Also a bonus for the teenage daughters was the free wi-fi at the restaurant.

On Thursday we had booked a hire car so we could visit Porta Aventura. Unfortunately the weather wasn’t as expected, raining by the afternoon and freezing. You could tell a few other people there were from the UK and expecting the weather to warmer than it was.

Arriving back at the site the weather was sunny and warmer even though its only a 20min drive from the theme park!  Apparently they had a snow fall at Zarragoza some 80-100km north east of us.

At 7pm we were notified by the site team that work was going to take place on repairing the sea wall – the rocks in front of our pitch on to the beach – and that we could either stay on the pitch or move to one further over – so at 8pm we moved a few rows over to another pitch, which was just as good. It was also more peaceful as 2 days later work started with a very large wagon tipping massive boulders at 8am in the morning on our old pitch. 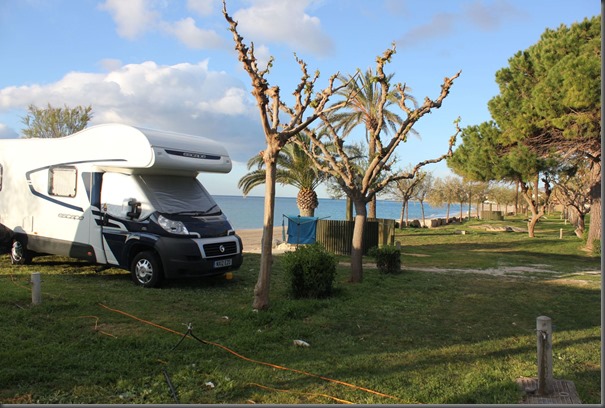 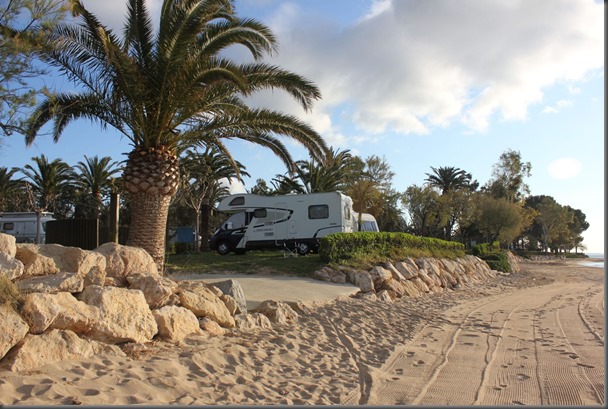 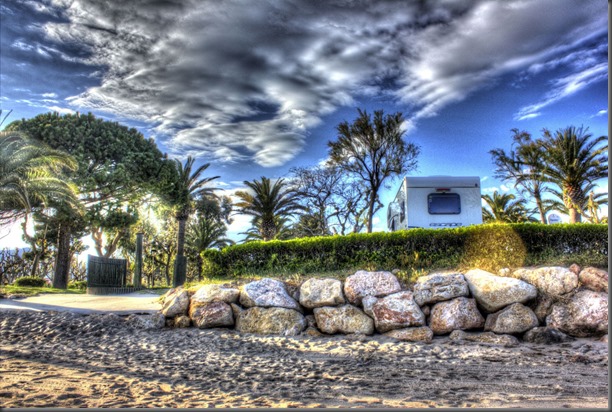 We enjoyed the site so much we stayed without venturing further afield, except for walks down the beach.

It was a sad, sad day when we had to depart early at 8am to return to Santander and the ferry. None of us wanted to go. Not something we have really had before.

Yet again, Brittany ferries had tweeted us to inform us the route was clear and all well for boarding that evening. 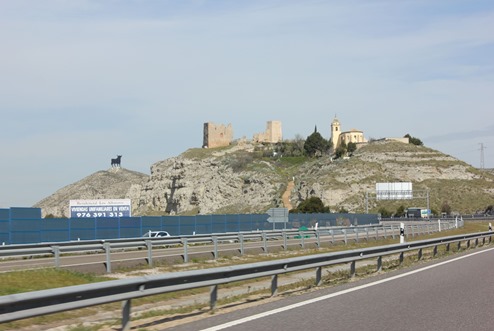 A long drive back and in hindsight a stop over would have been nice, allowing time to see and explore some places we passed. The only eventful moment was rounding a bend on the motorway to see what appeared to be an army helicopter hovering just above the carriageway.

(Artillery gun below and left of the helicopter)

Turned out it was hovering over a field off to the right adjacent to an army barracks. in the field were several artillery guns.

The wind and rain started up as we reached Bilbao. After Bilbao en route to Santander the rain stopped and the sun appeared but the high winds had picked up. This made driving quite scary with some severe crosswinds.  We dropped speed but due to heavy traffic we had to keep with the flow.  I never felt  so glad to see Santander after that section, so I could relax after the nightmare of the crosswinds. Next time I will seriously consider using Bilbao or time permitting drive through France.

We arrived some 3 hours early, but Brittany ferries let you use the boarding area to park free so you can wander around Santander, in case you need to get those last minute gifts! We were surprised that adjacent to the terminal most shops are closed down.

Boarding was very quick and yet again we didn’t have long to wait from checking in to being loaded to the front of the ferry. Again the bedroom was excellent and very clean. In fact we couldn’t fault anything.  Food was  great and the staff very polite and helpful. 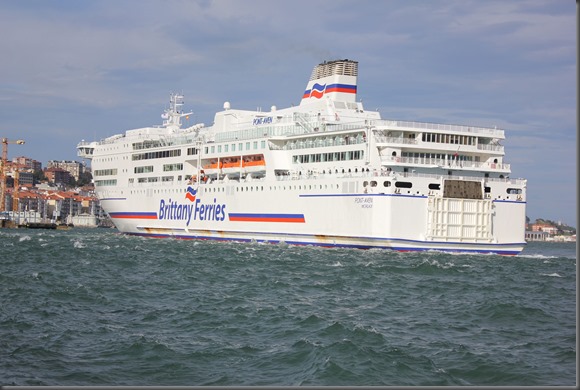